Bounce Number Two: Stay Ahead of the Plane

Posted on December 3, 2005 by stingraydoctor 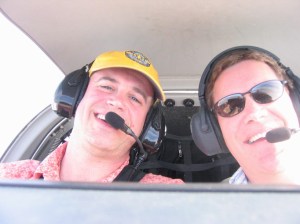 Colin and I strapped in again on Thursday for an airport bounce. The aim was to really try out the Diamond DA20 as well as get some more new airports into the log book. We rented the plane from South Bay Aviation at Torrance Airport. No doubt this is the best rental place we have used. They have a large fleet, a really nice FBO, reasonable prices and very nice staff. Colin got checked out in the DA20 while I was at work on Wednesday. We showed up early to find the airport socked in (fog) with and no estimate of when it might clear to VFR. That turned out to be almost 11 o’clock before it was marginal VFR. We hopped in the DA20 and got a special VFR clearance.

Colin thinks I was optimistic when I reported to the tower that we were in VFR at twelve hundred feet, but the next fellow on the ground was cleared VFR and he to reported clear at about twelve hundred. In any case, Colin took the first leg, up to Oxnard and off we went through the special flight rules corridor over LAX to the Santa Monica mountains. Colin is thinking of buying a Diamond DA40. He has a bunch of hours in the plane and has really researched it. The troubling thing has been that he does not feel as confident landing it as he does the Piper. Our mission was to figure out how to land the airplane and get lunch. We were batting five hundred on return to Torrance.

The DA20 and DA40 share a common ancestry in Austrian sailplanes. They have long, slippery wings and a very slick fuselage. This means they glide very well and are quite fast for the power plant in them. We had not realized until very late in the day what it means for a pilot trying to unlearn Piper and Cessna tricks and get the bird smoothly onto the ground. Colin has written before about the physics of landing, but I will just reiterate that the idea is to have the plane at near stall speed just a few inches off the ground. As it crashes from the stall the wheels will be right on the ground and all will be right in your cockpit.

The trouble with the Diamond is getting it near the ground at stall speed. At a distance of three miles from the airport you should be a thousand feet above it and at your approach speed. There is a routine for getting this together as you come into an airport and over time, in a familiar plane it is completely unconscious. In a new plane it can be tough, and here is how the Diamond was biting us in the butt: I mentioned that it is slippery and long winged. This makes it quite hard to bleed off speed. If you dive down you will speed up and the moment you start back up again the Diamond converts all your speed into altitude.

Picture a landing that starts as you pass the runway numbers on the downwind leg. Right at that moment you have the plane slowed to approach speed a molasses slow fifty-five knots in the DA20 and you are a thousand feet above and to the left of the runway. At approach speed the plane is losing about five hundred feet per minute and you are flying away from the airport. As you turn ninety degrees and slow the plane a bit more you are flying a base leg that is perpendicular to the runway but a mile past the threshold. The last turn is to final where the plane lines up with the number and sinks gently down for the gentle flutter that signals another good ending. At five hundred feet per minute of descent it takes two minutes from when you are abeam the numbers until you are touching down. At eighty to ninety mile per hour this is about three miles of distance: One mile on downwind, another on the base leg and a third on final.

In the trainer we have been flying it is pretty easy to save a screwed up landing. The plane slows down quickly and smoothly and drops like a rock when the power is cut. Not so in the Diamond. If I am at a thousand feet as I turn onto base (a not unlikely screw up on my part) then chopping the throttle will have me back on the glide slope before I turn for final. In the Diamond turning off the engine makes the plane quieter, but at least in the short term seems to have no affect on altitude. The plane is as apt to climb a little as it is to fall. Thinking that the problem might be in the attitude of the plane, you seek to teach it a lesson by pushing over the nose. OK, it loses altitude. However, it has made a seamless and low cost transaction trading altitude for speed. Now when you try to touch down the plane is moving too fast to be willing to settle. It just flies happily along a few feet off the runway, gently bouncing on the cushion of air that is ground effect as the far fence gets ever closer. If you watch the airspeed indicator the plane is slowing, but at such a apace that the runway will really need to be tens of miles long rather than one or at most two.

The solution is to take a firm hand about speed and this requires something that we have not had to do, and indeed are not particularly good at: getting ahead of the airplane. In fact, these airport bounces we have been scheduling are really about the most challenging thing for a new pilot as the new airports and unfamiliar patterns make getting ahead of the plane much harder.

Colin and I added a rule to the flight this time, the co-pilot calls the go around. If the co-pilot calls for it, there is no more trying to make the field, just firewall the throttle and head around for a less scary set up. This was a great idea because it really made the co-pilot part of the landing process and also relieved the pilot of worrying about two things, whether the landing was a go and how to get the plane on the ground. To slow a plane like the DA20 you have to raise the nose with the power low enough that you do not go zooming up. Slowly the speed will bleed away as the plane flies in this high drag, nose high attitude and you will be ready for the pattern. The trick is arriving at the pattern altitude as you pass the runway numbers going just eighty miles per hour. This must be set up miles away from the airport as there are no brakes on this plane. We did not manage a very good job of it even one time.

We did however get a lot of practice in the alternative to good approach planning the forward slip: stamp hard on the rudder shove the stick in the opposite direction and the plane will fly sideways through the air. You may think this is not aerodynamic and indeed it is not, it is the very best way to lose a good deal of altitude over a short distance while flying in a relatively straight line. The DA20 wants to fly so badly that the slip must be performed with a good deal of nose-high attitude or the plane will just speed into the ground ruining the landing. At the last moment you snap the plane out of the slip and drop it onto the tarmac. It works, it is fun to do, but it is a sign of piss-poor planning (or a lack of flaps). In any case, in the after action flight dissection that makes this game such an entertainment bargain for Colin and I, we finally realized that we were way slow in getting the plane to pattern altitude and approach speed. Next time will be better. Next time will also be a bit tougher to plan since we now have nearly twenty LA area airports. It will be a bit more difficult to get the next bunch.

Biologist
View all posts by stingraydoctor →
This entry was posted in Training and tagged clean. Bookmark the permalink.
%d bloggers like this: