Posted on January 11, 2006 by stingraydoctor

Pat Hernandez and I attended a scientific meeting in Orlando and capped it with an amazing trip to the keys to visit my aunt and uncle. We rented a 172SP out of Kissimee. The check out ride with Sunstate Aviation was easy and fun and the planes were in great shape. Pat and I headed to Everglades Airpark to see the edge of the ‘glades, then switched gears and went straight to the private airfield at Ocean Reef. This little community at the north end of Key Largo is a golf cart paradise. Pat really enjoyed her first experience behind the wheel of one of these souped up bad boys. 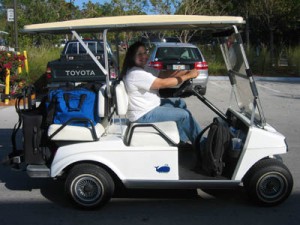 After a wonderful dinner cooked by Christine we planned a morning/lunch flight down the Keys to Key West. Christine had a 3pm appointment so we were primed to set out early. The weather really cooperated by getting warmer and clearer, and by dawn we had the clear blue skies I expect in South Florida.

We departed Ocean Reef and flew out over the flats west of Key Largo at fifteen hundred feet. We needed fuel, so the next stop was Marathon Key. The self serve pumps were knocked out by the hurricane, but a nice FBO gas fellow fueled us up from the truck while we took a bathroom break. My landings have taken a step backwards; I am coming in badly trimmed. This is in part because I am trying to land slower and I am still trimming for seventy knots (the Piper speed) and then flying sixty-five (the Cessna speed). It’s a wobbly ride when the plane is not trimmed well.

Key West was great fun. We got vectored around the naval air station (NAS) by a controller that we all agreed seemed grumpy. She was pushing us out to avoid lots of incoming P3’s and a set of jumpers that had started their descent about when we penetrated the NAS airspace. As we turned onto our base leg the Keys tower told us our traffic was a P3 Orion. I thought it might be the one we had just seen touch down but no, it was a huge bastard about 1/2 a mile away that flashed across in front of us at our altitude as it descended on final into the NAS. What an awesome sight to see a huge four engine plane that close while airborne. As we got closer to where it had been I had a moment to wonder at the persistence of the swirling black exhaust from the engines, then we got a pretty good buffet from the prop wake as we passed through it. The descent into Keys International included a slow speed drop through a kettle of vultures. We were really in amongst them as we went through four hundred feet. The landing went all right, but I am still hold off and bleeding airspeed too early. 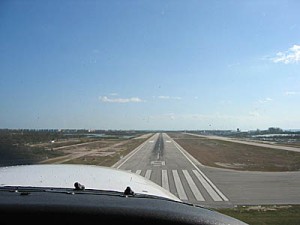 Short final to the Keys

After a great walk around and a Cuban lunch, we returned to the plane and hopped in for a direct flight (not over the keys) back to Ocean Reef. The scenery was really wonderful. A strong easterly wind laid lines of foam on the water and we saw a bunch of really remote small keys and grass flats as we headed north. Christine took a few photos of their house in Angler’s Retreat as we circled the airport before dropping in. 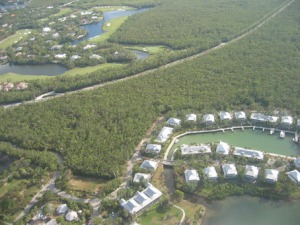