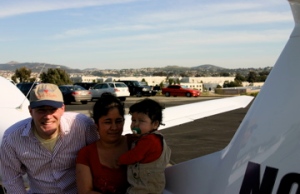 Jaime O. was unlucky. He was born with trouble with his small bowel and liver. But he was lucky, he was born in the state of California, so the state will help him. He’s on a list to get a new liver. The UCLA medical center is helping while his liver fails and while he waits for a new one. Jaime is two years old. He has a social worker who helps schedule the visits to UCLA’s medical center in Westwood and helps translate, when necessary, for Jaime’s mother, who only speaks Spanish.

So he is lucky to have Heather, his social worker, and the team at UCLA, the organ transplant team awaiting a liver and so on. He’s unlucky because he actually lives way down in Escondido, California, over a hundred twenty miles of various surface roads and freeways from his helpful doctors at UCLA. His mother doesn’t drive. There’s no way to make this daily trip on public transportation and make it to the appointment on time or back home in the same day.

This is where Heather calls Angel Flight. They work with a bunch of pilot volunteers in little planes. Angel Flight finds a small airport (Carlsbad/Palomar) near Jaime’s home and another (Santa Monica) near UCLA. They put all the information into a database on their web site and volunteer pilots log in, take a look at the “missions” available, and select one.

Or, in my case, on Thursday afternoon an email arrived saying they had a new, urgent mission for the following day, were there any pilots available to take Jaime back home after his treatment. I called the office and said I would be happy to fly him back down as my first mission.

My friend Art met me at the airport. There was a little schedule wiggling because Jaime was ready to head home sooner than they originally thought (11am instead of 3pm), but it sounds like they were able to get him lunch while he was waiting in the Angel Flight offices at the Santa Monica airport. Art uncovered the plane at 1pm and I got there in time to collect Jaime and his mother about half an hour later.

So for this flight we were not DiamondStar niner sever one romeo delta, we were Angel Flight seven one romeo delta. So each controller who dealt with us on our short, seventy-eight mile, straight-line journey would know that we were not a training flight, not a pleasure flight, not a business flight, but a charity flight involved in the transport of a critically ill patient and family members. I didn’t notice any different treatment, but air traffic controllers always seem polite, professional and competent to me.

The flight was uneventful. I lamented, as usual, my inability to learn a language because I would have liked to tell Ms. O. that any bumps were not something to worry about, that we would try to fly smoothly enough not to wake Jaime, who was already drifting off as we settled them in the back seats. She put on her headset and seat belt and put his headset on him. He smiled and closed his eyes.

Palomar appears to be a super-busy training airport. It also has scheduled airline service, so there was an American Went Brazilia (a large twin-engine plane with twenty-five passengers) coming in above me over the coastline. He was a little more than a mile away and only a hundred feet higher off my right when I started my descent directly toward the airport. He was on an instrument flight plan and had to follow a longer path inland to line up for the runway quite far from the landing point.

The airport, the same size as Santa Monica, was a zoo. There was traffic climbing out on the upwind, traffic on the opposite downwind, traffic on final, and the tower was talking fast. I had done really well so far making only standard rate turns (shallow banks), and only five hundred feet per minute climbs and descents. I turned base and then turned final. As I was making the turn onto the centerline of the runway the tower said, “Angel Flight seven one romeo delta, there’s a Brazilia a mile behind you, also on final, I’m not talking to him yet.”

Oh. “Brazlia in sight.” I finished my turn and then said, “One romeo delta can make a right three-sixty to allow the Brazilia past.” I mean, he’s a large, fast airplane with twenty passengers, and who am I?

“Negative, one romeo delta. As soon as I am talking to him, he’ll be turning.” Sure enough, even as I paused to think about that, she said, “America West fifty-seven fifty-two, immediate left turn for traffic. You have to talk to me before turning final.”

“Uh, America West fifty-seven fifty-two. We were cleared for the visual.”

“I realize that, you still have to talk to me before turning final. Make an immediate left turn for traffic.”

So the flight will be delayed on arrival. He peeled off behind me. She told him to make another left turn and to expect a five mile final. That means she was going to make him fly five miles away from the airport before he was allowed to turn around.

Meanwhile, a Citabria ahead of me was lingering on the runway, despite the towers directives to get off of it, and she had me make the three-sixty anyway. She said, “Just make a right three-sixty and you’re still cleared to land.” I was a little flustered by all the sharp words to the other pilots and for a moment started a left three-sixty (aiming right at the tower), but Art told me it was the other right and I apologized to the tower and corrected. The quick fix to land before the Brazlia, but after the Citabria stopped on the field meant I did a turn that was a little steep than standard rate. But the landing was as smooth as they get, so I hope that made up for it.

We took a quick picture by the plane (this seems important to Angel Flight, but I am not sure I would ask a passenger to pose again, they have enough on their minds). A little golf cart from the FBO whisked her away and we took off for home.

I like the flight up and down the coast. I would do it for fun. I was really happy to be a part of helping someone who was having a difficult time getting to the treatment. My plane isn’t really suited for the longer missions (there are a lot that are three hundred miles), but there seem to be a few of these shorter ones now and again. Since it is a charitable deduction the fuel (already less expensive because there is an Angel Flight discount) is half price. That’s hard to beat for a couple hours of flying. I’m going to try an adult patient next, to see the difference.

I am an architect, programmer, private pilot, husband and father. A couple of those I am good at.
View all posts by Colin Summers →
This entry was posted in Flight and tagged help. Bookmark the permalink.
Loading Comments...
%d bloggers like this: