Words from the Wise

Back in January of this year Diamond Aircraft Industries called and asked if I would mind talking with them a little about my plane. I am always happy to talk about the plane. Perhaps ad nausea. I don’t think I know when to stop talking about the plane.

I bought the plane when I had only flown 80hrs. That’s not a lot of experience, but it’s not terrible. I have a friend who bought his at nearly the exact same time, right when he finished his private pilot certification. I wish I had the nerve and confidence to buy it when I first flew it, which was after only ten hours of flying. I knew it was a great plane, and I would have had that much more time in the plane rather than in creaky old Cherokee planes from the 1970s. Ah well, hindsight is so sharp, isn’t it?

I was a first plane buyer, and a lot of the people I talk who did the same thing say they might have bought a used plane if they knew more. Well, technically, I did buy a used plane, since it had 115hrs on the Hobbs meter and was a demonstrator for the dealer. So the worst depreciation had already happened (that initial thirty thousand dollar drop from brand new to a little used).

This is the text that Diamond sent me to approve, which I did. I actually talked a little more about particular competitor’s models and what I thought of them. And, as is typical with me, I was much more long-winded. It is already tightened up. From this text Diamond’s marketing department pulled three quotes. They are using one in the DA40 brochure and two in their all-around brochure for the Diamond fleet in general.

I wonder if anyone that reads a quote in the brochure will think to google my name and DA40. (Right now this blog is the eighth link down. I don’t think many people click that far down.)

I am an architect in the LA area, and have several projects in Las Vegas. The Southwest cattle car from LAX to LAS became a real hassle, with security lines lasting an hour or more after 9.11. I just had to find an alternate way to travel – and decided that flying was the way to go. [I told a much longer story which is here in the first posts.] 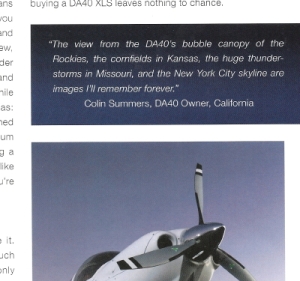 My DA40 gets me to my Las Vegas building projects much faster from my Santa Monica architecture studio than the airlines: while the flight time is about 2 hours, vs. 45 minutes via Southwest, door-to-door time is much shorter, as I take off from an airport close to home, and land at a GA airport closer to my projects. [I have a post comparing one of my first trips, I’ve gotten faster though.]

One of the key factors in flying for me is to get a different perspective from the air. The DA40’s great visibility is one of its great selling points. As an architect, I am very visual – and in the DA40 I have great visibility all around, forwards, upward and downward in front of the wing. Seeing the Rockies, the corn fields in Kansas, the huge thunderstorms in Missouri, or the New York skyline out of the DA40 bubble canopy made a recent trip I took across the US in my plane was particularly memorable.

Last summer, I flew from LA to the East Coast and back in my DA40. It was a great way to make many different stops, to see places, and visit friends and family. I took a friend or family member with me for the long cross-country, then had my wife and two sons join me in Boston. The DA40 is so capable – especially with the G1000 cockpit – that I felt totally comfortable flying into a lot of unfamiliar airports, including landing at Boston’s Logan airport. It was a really cool experience to be vectored right with the big airliners, and even being #12 for takeoff in the conga line with eleven huge passenger jets was a thrill. 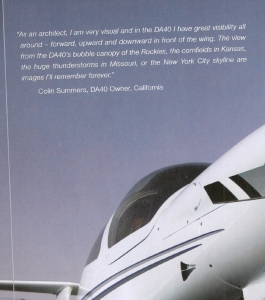 On long cross-country trips, the cockpit capability makes all the difference. For instance, I was flying from Albuquerque, NM to Topeka, KS – and had to circumnavigate thunderstorms all along the way. With the XM weather, I could see that a cell as 20 nm away, and moving away from me, so I could decide to fly around it, and in which direction. Plus, I can zoom out and pan, and see with the range rings which airports are possible stops after a two or three hour leg. The situational awareness is just so comforting – I don’t think I would feel comfortable doing these longer trips in unfamiliar areas without the DA40’s capabilities.

With my DA40’s capable cockpit, flight planning has become much faster. When I first bough my plane (I had 80 hours then), I would flight plan each trip in detail, with many way points. Now, with the G1000, I know that I can do a lot more quality decision making and planning on the fly, versus spending hours on the ground doing in depth planning, some of which will become irrelevant as soon as I am aloft. 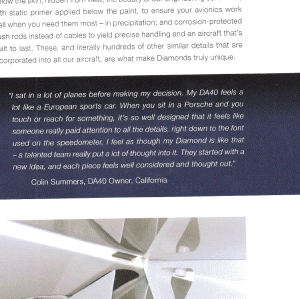 As a designer, I knew I wanted a modern, composite aircraft – there were too many things just wrong from a design perspective with the old-style aluminum aircraft I trained in. I understand new materials – and composites make much more sense to me than aluminum. Frankly, I don’t think I am competent to assess metal fatigue on an older aircraft! [That last sentence was from relating how when I took one lesson in a Cessna 172 the CFI walked me around and said I should check each rivet for safety. As if I could tell whether a rivet was air worthy or not.]

I sat in a lot of planes before making my decision. My DA40 feels a lot like a European sports car. You know how when you sit in a Porsche, when you touch a part, it’s over designed, like someone really paid attention to all the details, down to the font used on the speedometer. I feel my Diamond is like that: someone really put a lot of thought in it, and started with a new idea, where each piece feels well considered and thought out.

A key factor in my decision for the DA40 was low-speed handling. I am very safety conscious, subscribe to the NTSB Reporter, and I understand that the thing that kills lower-time pilots most frequently is a stall-spin accident in the traffic pattern. You have so much to do, it’s easy to get distracted, and before you know it, a wing drops and you are on the ground. The DA40 flies so well at slow speeds – mine stalls at 47kts – that I feel I always have such a good margin of safety. That was very important to me, as I bought the plane when I had only 80 hours. [I am pretty sure that I discussed the difference between descending under a ‘chute or in a full stall in the DA40.]

I totally, wholeheartedly see the DA40 as the best first choice for all new pilots. When you get started, you need a plane you can safely train in, and your typical missions are a few hundred miles. The DA40 is definitely the best plane for a pilot’s first 500 hours. [I wish they had used this quote. It’s really what I use in person to encourage new pilots to select the plane.]

The insurance rates I got quoted on the DA40 were much lower than on competitors’ products. Diamond’s safety record is really good, and the insurance companies recognize that in their rates.

The DA40’s outstanding fuel burn was a key factor in my decision, and still is. When I fly back and forth between LA and Las Vegas, I often see 8 gph at 130 kts. That’s difficult to touch with anything else – the DA40 is really a very efficient machine.

Whenever someone not used to personal aviation sees my DA40, they are very surprised by its shape. They really think it looks like a plane of the future – and of course, the glass cockpit reinforces that.

The easy access to the back is important to me. I have two boys, ages 9 and 11, who travel with me in the plane a lot. With the separate rear door, it’s really easy to load and unload them into the DA40’s back seat – much easier than in some other planes I looked at, where I would need to fold the front seats forward, which can be a hassle with kneeboards, headsets etc to deal with. [I told long stories of getting them in and out of the Cherokees we rented.]

I am an architect, programmer, private pilot, husband and father. A couple of those I am good at.
View all posts by Colin Summers →
This entry was posted in Just Words and tagged help. Bookmark the permalink.
Loading Comments...
%d bloggers like this: