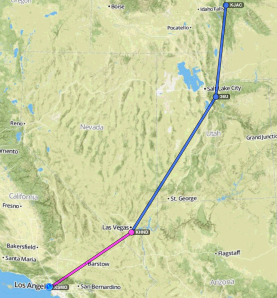 Part of the Lost Trip Report.

Our destination is the traditional Pleasant Lake in New Hampshire, but we started our trip with two hours along the route I have travelled most often. We were headed north, more north than we had been in the plane. Nell’s family has friends (Dick and Claire) who summer in Jackson Hole, Wyoming.

With the plane all packed, the iPhones charged, the stack of approach plate books stowed within easy reach in the luggage area, and the Kindles loaded with electronic books for boys, we rolled onto Runway 21 and a right downwind departure.

Nell was working with an actress and a producer on a possible series idea, and she needed a morning conference call. The timing worked out for her to do that from Henderson when we landed for fuel. We had practically rolled the boys right into the plane from bed, so it was great that the restaurant at the airport was open. They had a nice brunch (pancakes, eggs, bacon) while Nell used her iPhone and a hallway as a make-shift office.

It was July in Las Vegas, something I had promised myself I wouldn’t do anymore now that the projects there had wrapped up. It was already climbing to over ninety degrees before ten o’clock. The tarmac made it feel hotter. We got back in the plane as soon as we could and soon we were winging our way North. We flew out of the Las Vegas basin in a direction I have never been. The desert gave way to high plains, and there were more trees than scrub on the hills around the towns. St. George didn’t look like a bad place to stop (stretching our flight to there wouldn’t have gained us anything and I knew the terminal at Henderson would work for Nell’s call).

After St. George, the terrain started to be more serious and the altitude kept climbing. I was very aware that this is land that is only lightly settled, and settled almost entirely by Mormons. It was the Wild West down there, in some sense. They all had pantries full of food for two years, but they all believed in God’s will. I was, as usual, talking to air traffic controllers and as I was handed off the few times since Las Vegas, the controllers became more and more relaxed. Around Nephi the controller recognized the voice of a pilot in a small plane and they jawed back and forth a little about having to work on a Friday and can’t wait for the BBQ on Sunday and tell Matt he should get a real job.

They were unable to provide continuous flight following and a little south of Provo Bay we were on our own for half an hour or more. Eventually I talked to them again. They confirmed our destination (Heber City) and the controller wanted me to acknowledge the high terrain between there and here. I do. I have the terrain coloring turned on in the moving map options, so as we approached Provo Canyon I was keenly aware of the large red portions to either side of us.

It was magically, really, to fly through such a small break in the mountain range and into a protected valley beyond. The canyon was cut by the river leaving the Deer Creek Reservoir, which you can see flowing along next to Route 189. The Uinita National forest is on both sides of us, and the landscape is impossibly dramatic to fly that close to. With a few gentle turns we came out onto a plateau surrounded by more mountains. We flew over the reservoir and didn’t need to descend to the airport much because the ground climbed to meet us. The Heber City airport is 6,300 feet above sea level. It is a popular glider port, and as we entered the pattern there was a tow plane returning from releasing a glider. While we were there, the glider finally returned to land.

The FBO was happy to loan us the crew car, and we headed to a nice lunch spot. The dessert spot is even nicer, although the name has us laughing for the rest of our flight through Utah. Clearly the owners had a Dairy Queen franchise. The building is the red roofed barn and all of that. But they must have tired of it, so they renamed it Dairy Keen. My choice is too sloppy and I dumped it after a few bites. The portions are insane, the sort of softball-sized goop to put more insulation on you for the cold winters ahead.

I had reserved a car in Jackson Hole, but I told the FBO up there that I would call from Heber City to confirm our arrival. I couldn’t get ahold of them, but as we were leaving Heber City the woman at the desk assured me she would continue trying them. We took a photo with the Provo mountain range in the background and climbed back in.

By now it was midday and the July sun had warmed the already-thin mountain air. The plane believed that it is up around 8,000 feet above sea level. It had a full load of fuel (close to three hundred pounds), and was hauling its maximum on top of that. It climbs very slowly. The terrain to the north climbs faster, which means we were prudent and made a circuit of the Heber City area, out over the lake, back over the airport, watching for gliders and tow planes. We were just going to follow route 40 up to Interstate 80 and on into Wyoming.

We’ve never flown over this sort of country and it was breathtaking. We flew right over Park City, Utah, where I saw the premiere of The Aristocrats at the Sundance Festival. (One of our possible stops at one point was the Sundance Resort, which is meant to be VERY comfortable.)

That last leg was an hour and a half of flying, but it was not the sort of flying I want to relax during. The terrain below offered few emergency landing spots, so I kept track of them all the time. (We flew directly over as many airports as we could, but Wyoming is apparently more empty than Utah and there isn’t a call for that many airports, even the little ones.) The last forty minutes of the flight was over some mountains that are very close to ten thousand feet high. The Jackson Hole airport is at 6,400 feet above sea level, in a valley next to the Grand Tetons. So we needed to hop over the 9,000 foot peaks, and then make a nice smooth descent to the airport. The mountains made the communication with the air traffic controllers a little more tenuous (the higher we are, the easier it is for them to see us on radar, so they want us to stay high as long as possible; that makes the descent too steep into the airport).

As we descended, the moving map turned slowly red. I was on high alert. Pilots, especially in the summer, often turn down a canyon in these mountainous areas, and find themselves unable to turn around and unable to climb fast enough to avoid the end of the canyon. So I kept making sure we are really headed to the airport and not down some dead end. We did fine and got it on the ground in short order. The air outside the plane shouldn’t have been that different from Heber City, but it was. It’s crisp, delicious mountain air. The plane got tied down with the best view it has ever had.

The one drag was that there are no rental cars to be had in Jackson Hole. AT&T was having their annual retreat (golf and trout fishing galore, remind me to bring this up at the next shareholders meeting), and they rented every car in town. (Later, out of curiosity, I called a place we stroll by in town, which has cars on the lot. They were willing to rent me a car for the night, but it has to be back by 10am the next morning. They want $400.)

It wasn’t much of a problem. After a quick taxi ride into town and we were strolling down streets where every view is a collection of the mountains. The park at the center of town has archways built of the antlers shed by the elk that winter in the meadow outside of town. We met up with Claire for dinner and Dick soon after. Dexter listens, rapt, to descriptions of the trout fishing. He is despondent that we have forgotten his portable fishing rod, but it turns out that it is difficult to get a permit or fish on the more private streams anyway. We will need another visit with more than a single overnight and some more planning.

We strolled the town with some ice cream in hand. From the sandy beach along the Pacific to the mountains of Wyoming in a day is some good traveling.

I am an architect, programmer, private pilot, husband and father. A couple of those I am good at.
View all posts by Colin Summers →
This entry was posted in Just Words and tagged clean. Bookmark the permalink.