One of the keys to safety in aviation is situation awareness. It is sort of a catchall for describing the environment, aircraft, and the human factors that affect a flight. Most importantly, the risks associated with the flight or the threats to the safety of the flight.

A lot of the awareness begins long before the flight, gathering information about the weather systems in the area, the runways and conditions at the airports you are flying out of and into (including an alternate airport near your destination, just in case you cannot land at your intended goal), and the possibility of Temporary Flight Restrictions (TFRs).

During the flight itself situation awareness has to do with the speed of the airplane, the terrain around you, the weather, and the route of flight that you expect for the remainder of the time you are in the air. On an IFR flight you are under the positive control of an air traffic controller, and since they can change your route at any moment you are then actively trying to adjust your picture of the rest of the flight.

This is mentally taxing. Possibly less so for someone with a strong visual sense used to constructing a virtual representation of their current or future reality, but taxing in any case. On one of my instrument flight lessons I remember being under the hood, staring at my instruments, studying the IFR low-altitude chart, briefing the approach, and keeping an eye on the moving map on my MFD. Somewhere near that ninety minute mark I became despondent about not getting any of the things from that days’ flying that I liked about flying, and the truth is that I was exhausted by all of the mental tasks. 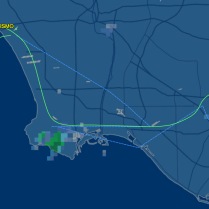 Last Saturday I flew down to John Wayne Airport to collect Dexter from his Latin Convention. It’s a quick thirty-five minute flight (or twenty-five minute if you are flying VFR and can go more direct). I popped up on top of the clouds at a little over two thousand feet above the Pacific, but I remained on my IFR route because it was overcast at John Wayne and I was going to have to follow an instrument approach back down through the same marine layer to land. So although I could look out the window, and did on occasion (especially when there was another plane nearby), I mostly focused on the instruments, my chart, the moving map, and my understanding of the instrument approach plate. On most of my instrument flights the navigation has deviated almost immediately from what I was given as a clearance. This one was no exception. 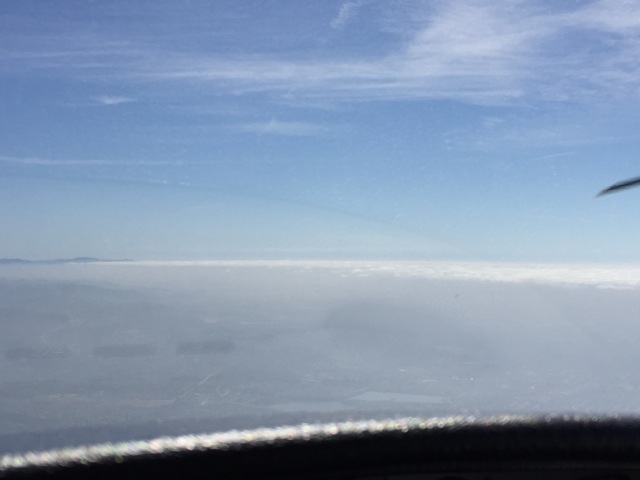 Somewhere down there is an airport

As we got close to the final turn toward KSNA, which would bring the plane down the glide slope on the Instrument Landing System to runway two-zero right, the controller started giving me “vectors for sequencing.” That means there are some fast planes that need to go by first (John Wayne has a lot of passenger jet traffic), then they will let me have my turn down the slide. 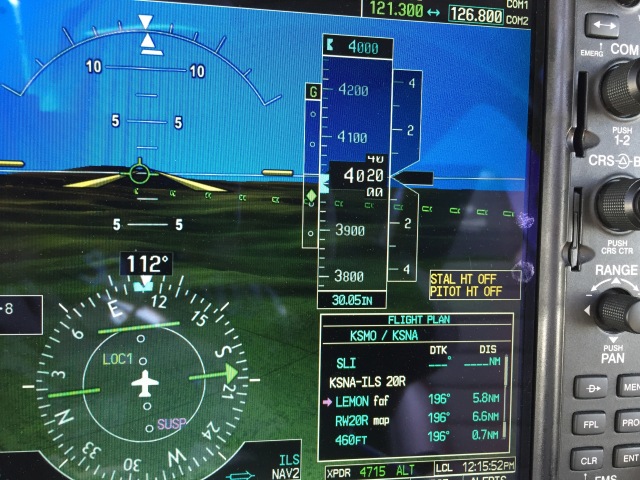 Green boxes, near the horizon, leading to the right

And this is where I love having the synthetic vision. If I were just staring at that IFR routing chart, studying my place on the instrument approach plate, and constructing my position on them by referencing my moving map and other navigation aids I would get a little frustrated. As it was, I looked at the display, saw the light green boxes off in the distance, and saw that I was wiggling my way toward them. It is a sort of natural augmentation of one of your primary senses that really makes maintaining a good situation awareness easier. Making that easier has a definite impact on safety of flight. (Synthetic vision is now standard on new Garmin G1000 installations (and all of the fancier version of the G1000, like the G2000 and G3000). It is a ten thousand dollar upgrade if it didn’t come with your plane, which is a hard pill to swallow and one I was unwilling to stomach for our Diamondstar. Susan’s plane has it, though, and I’ve mentioned using it before.

In a few more minutes I was turned to intercept the final approach and sliding down toward the landing zone of two-zero right. It took long enough to drive to get Dexter that it was VFR by the time we were leaving, but the synthetic vision was great for the flight down.