It was the middle of May, which means the end of the school year. So it was time to pick Dexter up from Cambridge and ferry him home. The forecast for Saturday was rainy, which was killing my mood a little. While Dexter had his last 3hr final (Life Science) I was going to triage his room so that we knew what we were bringing home, what we would store and what we would toss. Walking around Cambridge in the rain did not feel like a good time. The day dawned and it was going to hold off until 5pm. Phew.

By 3:00pm we were merrily rolling along in our Lyft to the Bedford airport. My only real concern was that we might want to climb above weather and I wasn’t sure what the oxygen cylinder had left in it. Nell and I had just crossed the country and used it the whole time (for me, part of the time for her). Fortunately, there was more than half left. I got us all packed up, everything strapped in carefully in case there was turbulence (it makes it so much harder to fly IFR when you are being pounded on the head by your own luggage).

I had filed an instrument flight plan to Gary, Indiana. Our goal was for Dexter to get to stop in Chicago and see his girlfriend. I decided to try KGYY as a destination since the difference in cost between that and stopping at Midway would more than pay for my hotel room. As the engines warmed up and Dexter settled in I asked for my clearance. The controller warned me, “Stand by for a full route clearance.” I said I was ready to copy. 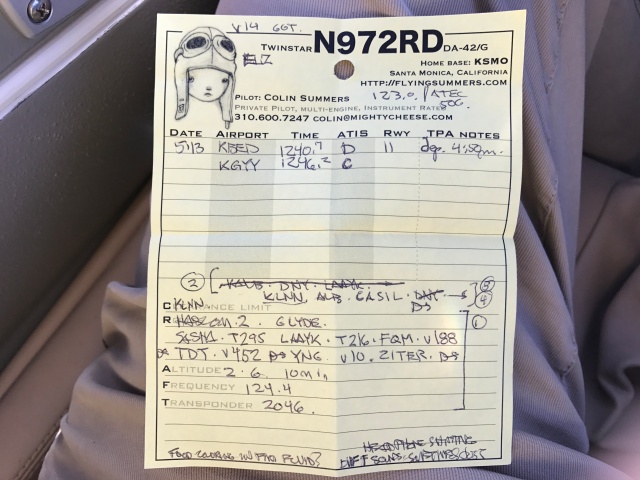 There’s the kneepad. I managed to write it all down as he was saying it. And I read back the entire thing verbatim and, on the first try, he said, “Read back correct.” There was a pause and I thought he was going to say, “Nice job,” but it’s Boston. We taxied to the active runway (one-one) and the ride was long enough that by the time we were there the engines were warmed up. I held the two buttons for the nine second automatic run up. Through the magic of ForeFlight I had the entire route plugged in and sitting in my left hand scan:

So I took off. And in the G1000 I had only put the first couple waypoints because I was pretty sure that I would have time along the way to put in the rest. It was looking like a five hour flight (although I had picked out Lost Nations airport in Ohio as a good fuel stop and that was midway). As we climbed to the east, then turned south and finally west, I looked at the NextRAD images of the weather. I stay out of anything convective, but there were no reports of that. Winds on the ground were benign. But moderate precipitation can make a racket as it is hitting the plexiglas canopy at a hundred seventy miles an hour. As I was switched to Boston Center ATC I saw that if I flew up toward Albany (a ten minute detour), I would skirt the yellow and a lot of the green. I have learned from my friend Tim not to ask ATC for things, but to state what I need. I told them I needed to fly directly to Albany for weather. The controller said in five miles he would clear me to Albany and two minutes later he did exactly that. “Direct Albany, Delancy, LAAYK intersection, rest of clearance unchanged.” Got it.

I was happy to be flying along the edge of the storm, in and out of a magical space between the layers of clouds, every now and then glimpsing the ground from 6,000 feet. But I kept looking at that leg to the Delancy VOR and seeing half an hour more in the rain. The outside air temperature (OAT) was 33F, which meant I had the pitot heat on and the FIKI system had been going for about twenty minutes, just in case. You don’t want to turn that on after you are in icing conditions.

I told the controller I needed to re-route a little less south and he said, “Albany, CASIL intersection, Delancy, the rest of your clearance unchanged.”

We flew on for another fifteen minutes, while I checked and double-checked the weather on the iPad (ADS-B sourced weather) and the G1000’s MFD (XM sourced weather). I still didn’t like going south, even after CASIL, but the controller said he couldn’t route me more directly west than that. Then I saw KELZ, the Wellsville Municipal airport. I said I needed to change my destination due to weather and the controller gave me the last of our re-routes: “Cleared to the Wellsville airport, direct Albany, CASIL, direct to destination.” Now my magenta line took us on the shortest route out of the storm.

Through all of this, Dexter slept on. He had studied for over six hours straight on Friday, and that was just what I saw for a little session in my hotel room. And he lost a little sleep over the exam, so even with the rattle of the rain on the canopy he seemed to be pretty solidly out cold.

It was hard work for that first ninety minutes of the flight. The freedom of being able to fly out through the (small, weak) storm was so great, though. If you were tracking us on Flightaware you would have gotten a better image than this one, because this makes it look like we were in the weather for longer than we were (and we were never in the yellow). Flightaware is an amazing tool, but when it has to pick the background for a flight track it has to show the weather at a particular moment in time, so they pick a frame in the middle of the flight. By the time the storm had moved that far north we were already over farmland and out the western edge of the clouds.

It is really hard to describe the feeling when you see the skies ahead starting to open up. Glimpses of the ground become more frequent and there are shafts of sunlight stabbing down into the space we are flying through. 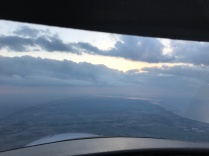 As Wellsville approached I canceled our instrument clearance entirely and continued on with VFR flight following. There were still some clouds, and as we flew past Cleveland we even flew through some rain, but we were never in IMC again. And the sky just west of Cleveland was so amazing that I had to shoot a video. On these sort of flights the dynamic quality of the sky is constant entertainment for me, where I am trying to plan the way ahead, but also enjoying the views to the sides and of the ground below.

It was a successful flight. We landed at Gary, Indiana at 9:16pm local time. The FBO there (B. Coleman) is amazing (and named after the first African American woman pilot). After landing at night, riding our Uber into the city and collapsing in a hotel room bed, I was very happy to take a walk along the lake shore. 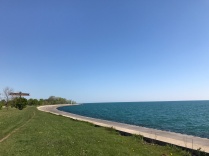 And, overall, the trip across was a success. The last leg was a little bumpy, from Albuquerque to the Prescott area, but then we came into bright sunlight over the Los Angeles basin, listening to a funny podcast that Dexter found and downloaded when we were in Chicago. We were happy to be in sight of the west coast.

1 Response to The Clearance Test