This blog is written by Adam, Colin, Rudy and Dexter, all Summers Brothers. It was started in 2005 when Adam & Colin started their flight training in Santa Monica, California. 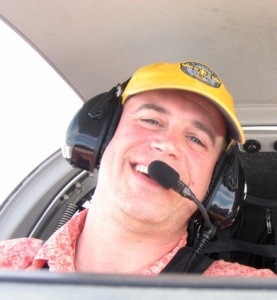 Adam Summers is a marine biologist. He is a full professor at the University of Washington and his laboratory is part of the Friday Harbor Laboratories. His C.V. is available on his lab’s website, but it doesn’t mention that he’s a private pilot with more hours crossing water than most non-commercial pilots have crossing land. He spends his time below ten thousand feet, within a hundred nautical miles of KFHR, his home field. Although that sounds like his flying is limited it is always good to have a goal and he has a separate blog about working his way toward flying a hundred different types of airplane. He lives in the San Juan Islands with his wife, Sharalyn Lehman, and their two children.

A decade with this aircraft company behind me

Colin Summers is an architect, programmer, inventor, and for twenty years was a stay-at-home dad. He is married to Nell Scovell, a television writer and producer. They live in Santa Monica, California, in a soon-to-be-empty nest. He enjoys travel, but mostly domestic and mostly in the little plane.