By way of Explanation 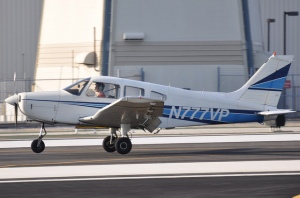 N777VP is the Piper we train in

Back near the end of July 2005 I wrote the following bit of explanation for some friends about my new interest:

Walking down the sidewalk near the house, in the sun, with Rudy’s hand in my right and Dexter’s hand in my left, is beyond my meager powers of description. I am filled to bursting and I don’t have the slightest way to scratch at the surface of what whirls inside me. Sometimes I feel regret, because being blinded by the sun, squinting the way I see Dexter squint, is one of my few memories of my father, and I remember I’ll never enjoy his enjoyment of Rudy or Dexter. Other times I feel a flutter of pride, because the boys are so affectionate, so naturally open to one another, and I feel confusion about that too, because I know that isn’t my natural inclination, so I am not sure where theirs is founded. I suspect I owe Nell for that part of them.

But really, it all rockets around inside me and I have nothing to say. I smile. I’m sure I look like the village idiot (or Stevie Wonder, because I sometimes close my eyes) being led down the sidewalk to the convenience store to get milk and ice cream sandwiches. I tumbled to the sensation soon after we moved to the neighborhood, which has a similar, simple, suburban scale to it as my neighborhood had when I was Dexter’s age. So, when I can, I recreate this funny three-person waltz. I know they won’t be at the hand-holding age forever.

Sometimes I think of my grandfather, and a moment in Dublin (I was a year younger than Rudy is now), when my grandparents visited. We were six people leaving tea at Bewley’s and my grandfather was already seventy years old. The rest moved ahead and I looked back to see him taking a slow step up the high curb up from the cobbles. I went back and took his hand. He was a quiet guy most of the time, like me. We didn’t talk. I held his hand and we walked along the narrow sidewalk on the outside of the Trinity College campus. I remember my mother looking back and my grandmother checking us a moment later. Mostly I remember being happy to walk with him; me slow because I was small, him slow because he was old.

When my grandfather was a little younger than twenty, World War I was on and he wanted to fight. He wanted to fly. He had never flown in anything, so I am unsure how he came to this conclusion. He went to Texas. That’s where the Canadians were training American pilots to fly for the RAF.

After nine flights in December of 1917  a total of 2.8 hours in the air  he was allowed to solo. He made five successful landings and then he crashed his wood-and-canvas biplane, breaking the lower wing, the propeller, and the landing gear. He was unhurt. He went up again the next day. He flew in Europe, although most of the time he ferried brass around or worked as a test pilot. He crashed a lot, which was part of the job back then.

Science, freedom, beauty, adventure: What more could you ask of life?

Charles Lindbergh, writing about aviation. Reading his biography rather closely I believe that the loss of his son broke him somehow, and he lived his life fractured, making mistakes forever afterward. But he was right about aviation.

Rather randomly back in April I used maps.google.com and put in flight training and my zip code. A tiny flight school popped up right at my tiny local airport.

Nell had mentioned a few times to people that the drive our place in the desert was going to be more than two hours and she seemed bummed by it. I wondered if a straight line in the sky might make a little more sense. I had no idea what it would entail to fly there, but it made me curious about the whole question of private airplanes.

I called. I said I just wanted to know what it would be like to be up in  a little plane, and what the controls would feel like, and did they charter for as little as an hour so I could go up and hold the controls while the airplane was in flight…? The guy cut me off:  That’s a standard introductory flight. I went down the next morning. I called my brother on the way and he was so excited he practically jumped through the phone.

Nell said, a couple days later when I was describing this first flight to a friend,  Listening to you talk about flying is like listening to someone talk about golf. It’s not really interesting to other people. I resolved not to talk about it much, which isn’t difficult for me, but I could tell you a lot about that initial flight. Other than  running the radio, which is what Anne Morrow did for Charles Lindbergh as soon as she got the hang of it, the instructor didn’t touch the controls. He talked and I flew the plane. I bounced on landing and he grabbed the yoke and apologized. “Things were going so smoothly I forgot you hadn’t landed before.”

Dad, I left my heart up there.

Gary Powers, describing his first flight at age 14. He went to great heights to visit it on occasion. On one of them he was shot down.

It is similar to sailing for me. With a small plane you feel the breath of the wind. There is a visual romance of being above the ground, seeing it in the way that I imagine it a lot of the time, a plan view but with texture. I’ve been reading a lot of books about it, because I am so startled by the whole experience. I read Free Flight about the general aviation industry and how two little airplane companies (Cirrus and Eclipse) are set to revolutionize it. I read The Killing Zone about how pilots with 50 to 350 hours kill themselves (and their passengers). I’m in the midst of a long book about becoming a Private Pilot, and a book called Stick and Rudder which is what a lot of WWII pilots read to help teach them to fly. I’ve started Inside the Sky, which is a series of essays by the Stick and Rudder author’s son about being up off the ground.

I have flown thirty hours. I have made seventy-eight landings, many of them pretty good. I’ve landed a couple times, including once with Rudy and Dexter in the back, where the wheels just kissed the ground and the only sensation of transition was the slight hum as we felt the wheels start to turn. Dexter was napping at the time.

Nell has been supportive, tolerating occasional rants about why JFK, Jr. should still be alive, or why it was a Darwinian event. She sees me clip stories on the coming air taxi revolution, and allows me to spend a few hundred dollars to fly from Santa Monica, to Hawthorne, to Torrance, back over into the valley to Van Nuys, only to return to Santa Monica, something I could do far more cheaply in a car if I had a few more hours to spend doing it.

I have a long way to go before I am allowed to take an FAA check ride, which if I passed would allow me a Private Pilot’s certificate. (I don’t fly every week; if I do it is often only once a week. This is not the prescribed method to attain a license in a hurry, but I am doing other things.) I am not entirely sure I will make it all the way through. Some days I don’t feel capable of the variety of tasks necessary in the cockpit. (The talking is the hardest part, I would like to fly silently over the houses, up over the hills, out across the ocean, all without talking to anyone.) I am very aware that there are people that shouldn’t be pilots (hello, JFK, Jr.), and I would like to determine as quickly as possible if I am one of those people.

One of the side benefits that I never expected is that my brother came up and went flying the day after I first did and he is a fanatic. Even I get bored listening to him talk about flying. Most lessons we do together: in ground school sitting next to one another, then he pilots while I ride in back; then we land and trade places. So I’ve gotten to spend a lot more time with him recently than I have in years.

The day after Nell took the boys to New Hampshire for a visit to her family, I soloed for the first time. I did three smooth take-offs, two very smooth landings, and one slight bump landing. (In contrast to my grandfather, it took my more than twenty-five hours to be qualified to solo. On the other hand, I didn’t break the propeller, wing, or wheels, so I am not sure who wins.) Since then I have been signed off to fly from airport to airport by myself.

I fly because it releases my mind from the tyranny of petty things.

Antoine de Saint-Exupery He wrote The Little Prince, but he was also an ace during WWII. A few years back they recovered his plane from the Mediterranean.

With about fifteen hours logged, I put Rudy and Dexter in the back seat of a Cessna (I learn in a low-wing Piper), and flew them out to Catalina Island. This is quite a journey otherwise: forty minutes down the 405 to the 710, parking by the Queen Mary, boarding a fast (fifty-minute) boat or the slow (two-hour) one, and grinding along through the waves to get to Avalon Harbor. In contrast we climbed up from Santa Monica, flew over LAX and in fifteen minutes we were out over the ocean. As I gave the instructor the controls (Catalina is a tricky landing; I wasn’t going to do a tricky landing with the boys in the back seat), I glanced back. Rudy was asleep, but Dexter was glued to the window. His eyes were huge as he drank it in: the waves on the shore, the sand and the rocks, the fields where I told him he might see buffalo. He saw the boats all bobbing in the harbor and the houses clogging the notch in the hills just above the boats.

We landed, and while the instructor pushed the plane back into a parking spot I walked with Rudy and Dexter to get a soda, holding their hands as we crossed the tarmac to the little luncheon place on top of Catalina. At the time it felt like such a fabulous adventure, an entire world opened up for them, all sorts of new places to see and a new way to get there.

When they were in New Hampshire, far away from me, I wished I could climb in my little plane and fly across the country to be with them, and to sleep with Nell.

I am an architect, programmer, private pilot, husband and father. A couple of those I am good at.
View all posts by Colin Summers →
This entry was posted in Just Words and tagged clean. Bookmark the permalink.
Loading Comments...
%d bloggers like this: