Over to you, Otto 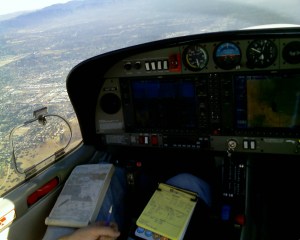 That’s my lap as I fly from Oxnard (OXR) back to Santa Monica (SMO). I took off through a thin layer of clouds. On my right knee is my miniZ kneeboard (from ZuluWorks), where I have copied my clearance and I have the Hobbs time and ATIS written down. Little pilot notes. On my left knee is the book of approaches into various airports, open to the VOR-A (alpha) approach into Santa Monica. I am nearing the Van Nuys VOR, and soon I will turn toward DARTS, my initial fix on the instrument approach.

A year ago we were very happy to fly up in a rented Piper to Fresno so that we could drive into Yosemite and eat Turkey with the LaZebniks (the boys’ cousins). This year we’ll just be at the LaZebniks’ house instead, so we have planned a trip up to Sonoma for the following day.

I have been watching the weather up in the Bay area and it seems likely that we will be flying into some clouds as we descend. If we do, it will be the family’s first instrument approach. (Well, we did one into Santa Monica, but only because the glare was so bad.)

I am legally current and certificated to fly us through clouds, but I am doing some more work each day before the flight so that I am not just current, but comfortable and proficient. I finished one DVD course on my computer and I am two thirds of the way through another. They are specific to our avionics (airplane electronics) and have both provided some good tips and tricks. I’ll be flying each day before we go so that I am very comfortable with the plane and the procedures on Friday when we head up.

I wanted to fly as I expect to be flying on Friday, which is by delegating the en-route flying duties to Otto, the autopilot. The trip becomes more of a management of systems and less of a flying task involving the stick and rudder. It is less visceral (I can’t feel a change in wind affect the plane), but it is steadier and more predictable.

On Monday I flew with my friend Art. I forgot to put in the LAX VOR before taking off (I know on the map where the 315 radial is, so I was surprised it wasn’t sweeping in; I just turned where I needed to for my next heading). The ILS into OXR is a little confusing on the page compared to the G1000. I switched to the tower a little early.

Flying Tuesday I corrected those errors and wound up staying a little high instead of descending on the glideslope, because I was trying to locate the outer marker on the approach chart and compare it the G1000.

Neither of these were large mistakes. The first wouldn’t have been an issue even if I had been in the clouds (I always remain aware of where the plane is on the moving map), and the other two just required an extra sentence or two exchanged with air traffic control. But I want to be perfect, so I am always correcting. (That’s the general idea with piloting: always be correcting back toward perfect.)

My flight from Oxnard returning to SMO by myself was perfect. I spotted every plane they pointed out as traffic. I flew every heading and altitude perfectly (in part because I was putting them into the autopilot, say hello Otto), and flew the approach flawlessly.

Tomorrow I will go up in the morning with Art and fly a hold, which is a little racetrack in the sky that instrument pilots fly when they need to wait somewhere, or need to descend in place.

(When instrument flying you can go out and practice when there are clouds, or you can find a rated pilot to fly with you while you fly with a vision-limiting device (under the hood). Art is a well-tempered guy to fly with, always scanning for traffic and asking good questions about what I am doing next.) 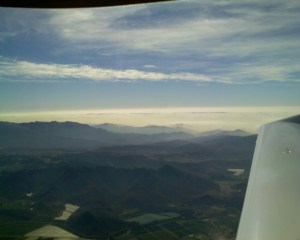 It’s fun to fly with Art, but it was also fun to fly over the Simi Valley

and look back over the Santa Monica mountains to the blanket of clouds covering my neighborhood, airport, and usual haunts. A few months ago that would have been a paralyzing sight, since it meant a change of plans (landing in Van Nuys, most likely), and a disruption. Now, it is just a beautiful view of the sun reflecting off of the clouds and the mountains coming up through them.

I am an architect, programmer, private pilot, husband and father. A couple of those I am good at.
View all posts by Colin Summers →
This entry was posted in Just Words and tagged help. Bookmark the permalink.
%d bloggers like this: