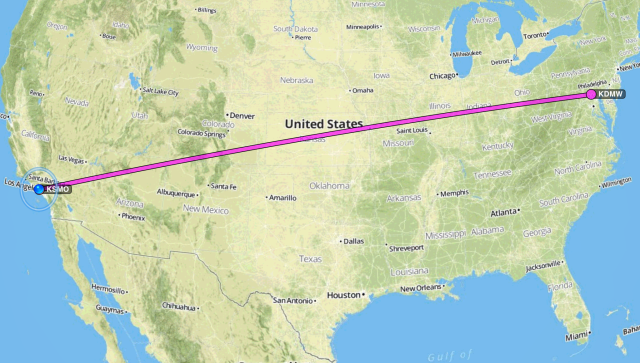 On Tuesday morning at 0800 Adam and I will leave Santa Monica Airport for Carroll County Regional Airport in Westminster, Maryland. (Nell and the boys will follow on JetBlue, arriving in Boston on Saturday morning. Then we’ll be able to flit up and and down the East coast, starting with a week in New Hampshire.)

Because of the variability of the winds aloft and weather, we can’t plan more than a couple legs ahead. We know that we are going to land in Sedona, because it is meant to be a beautiful airport and it has a good diner. A logical stop after that is Albuquerque, and then probably on to Amarillo.

We will be trying to write blog entries along the way, but for up-to-the-landing coverage, make sure that you are subscribed to the Google Group. I will send a time, photo, and airport identifier each time we set down (as long as I have cell signal). Then you can go to Runway Finder and put in the collected identifiers (separated by semicolons) to see our route. Try KSMO;KSEZ;KAEG as an example, that’s our first two legs on the map. (You can press the map button on their page to see it as a regular Google map instead of an aviation chart.)

See you on the other side.

I am an architect, programmer, private pilot, husband and father. A couple of those I am good at.
View all posts by Colin Summers →
This entry was posted in Just Words and tagged clean. Bookmark the permalink.
Loading Comments...
%d bloggers like this: