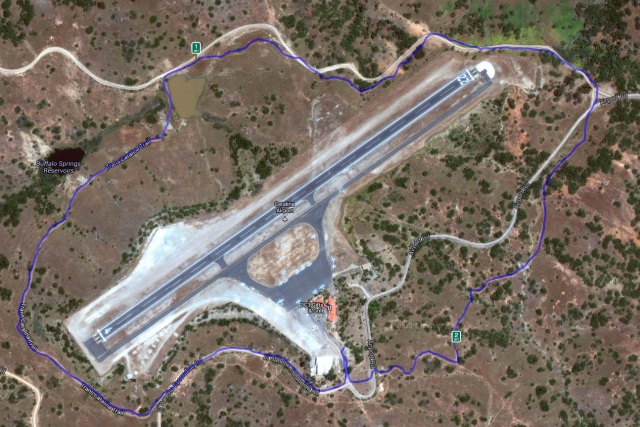 Just a Little Over Two Miles

I am embarrassed how long it took us to find it, but there is a delightful little two mile hike around the airport out on

Catalina. Above is the Runkeeper track of the last time I hiked it, with Dexter and his friend Alex (at the right in the small photo). I try to make it out there with either the family or a visitor once a month. (Adam and I often flew out to the island soon after we had our certificates to share a lunch of buffalo burgers. But it was a while before I knew I could hike around the airport on a little trail. ) Catalina’s landscape is what Los Angeles would be like if we hadn’t started to water it. The Wrigley family (gum, baseball) bought the island in 1919, believing it could be developed into a resort destination, like Bermuda or the Hamptons. They transplanted palm trees, created a beach with sand brought over on a barge, and made it seem as glitzy as possible. Primarily, they failed.

That’s okay. They did well other places. When they gave up they put 90% of the island’s acreage into a nature conservancy, keeping a few little pieces for the family and carving out some area around the two towns (Avalon, the main tourist destination, and Two Harbors, a community so small it doesn’t have a schoolhouse).

In its hey day, the island was quite an attraction. Marilyn Monroe was out there at one point. Charlie Chaplin’s brother ran an air service to fly people to the island on amphibious airplanes. The Cubs did their spring training on the island for a few seasons (the Wrigley family owned the team), and during the war the army took it over to train troops (there is still a base on another island just a little further out to sea than Catalina). The first movie with sound was shown in the theater in the “casino” in Avalon, built by the Wrigleys.

Rudy and Dexter, airport in the background 2009

The Wrigleys had a DC3 which they used to fly out to the island (and presumably back to home in Chicago). There was no place on the island flat and level enough for the large plane to land (which is why the public aircraft service was done with flying boats, they landed on the water and then taxied out of it via a concrete ramp). So the family truncated the tops of two of the taller peaks on Catalina and used the material to fill in the space between them. They not only created a three thousand foot runway, it was at 1,600 feet, which was well above the marine layer of fog that plagued the other coastal sea level airports at certain times of the year. (The “June Gloom” is on the of the motivating factors for SoCal pilots to get their instrument ticket. It is usually only a few hundred feet thick and often only five hundred feet above the runway, but it keeps VFR pilots grounded during some of the best (otherwise) flying weather.) They named this little strip “The Airport in the Sky.”

Not every Landing is Easy

When I was training I read (and heard) many warnings about landing at Catalina. There were two in particular. The first was how the runway was constructed, which was with a hump in the middle. That meant that when you landed you were going uphill, and you could only see to the midpoint of the runway. The true end of it was hidden from view the moment you touched down. Most little planes aren’t good for landing on 1,500 feet, which is what you would seem to have. So the key was to just not panic, there is twice as much runway as you think when you put it down. (It also means that you can’t see to the end of the runway to see if there’s a plane there, so using the radio to check in with the other pilots and paying attention to where they are is key.)

The tougher problem is wind. The runway is perched at 1,600 feet like it is on a mesa. It looks a little like an aircraft carrier. If there’s a strong enough breeze it can roll off the runway and down the cliff face, creating a down-elevator effect just short of where you are trying to land. So just as you are setting up to land, slowing down and pulling back the throttle, it is possible to fly into a downdraft and lose a couple hundred feet of altitude. I always picture this happening in an instant, leaving you staring at the cliff face through the windshield. In reality even in a twenty knot wind that came right down the runway I lost less than twenty feet. But I am always prepared for it, and I suppose if it were a surprise I might have been unhappy.

Because of those two factors, flying to Catalina is a special checkout for rentals in the Los Angeles basin (and down into Orange County). For the very first month we had the plane (January 2006) my parents were staying in Two Harbors for the entire four weeks. I was their grocery delivery service, and also flew out guests. And the boys and I flew out to spend a weekend with them, hiking around and enjoying the quiet. So I learned to land the new plane on one of the more difficult landing strips in the area, which probably helped with my confidence. I landed too fast then and I land too fast now. I’m still working on it.

One of my scarier moments in the plane was in that first month. I had loaded a case of Pellegrino on the right seat (there were a bunch of bags and another box in the back seats and I was alone in the plane. During the flight my kneeboard (the old, full-sized one, now I have a Mini-Z from Zulu that is perfect) started to bother me. So I yanked it off and tossed it over with the bottled water. Just as I got down to short final I started to ease back on the stick, only to have it hit a hard “stop” somewhere. So the plane continued it’s dive toward the end of the runway. After a quick scramble (as I started to spin the trim as a possible fix and prepared to duck into a hard right to spiral down toward the water two thousand below) and I found the kneeboard wedged in front of the case of water, blocking the travel of of the stick.

Pog is in there Somewhere 2006

When I collected them at the end of their stay we packed the plane up the way we used to pack up the family station wagon, the difference being that my mom was wedged into the back and I was in the front seat “driving.” If I was doing the same thing today I would have put the luggage in first and then had my mom next to the operable exit. This would have been stupid if I wound up ditching the plane in the water and she was trying to climb over that pile to get out. I also flew the airplane within ten percent of its maximum gross weight off a runway that was probably only a few hundred feet longer than the POH recommended for that load. Fortunately, the Airport in the sky means that we didn’t need to climb at all as we took off. We were able to descend a bit to pick up some airspeed, and then turned along the coast for one last look at the island before turning for the mainland.

The City of Los Angeles is Back There

We live in paradise, but there are a lot of people here with us. The weather is perfect year round, there are no bugs to speak of, the air quality is blissful with almost no humidity, and the ground is lush, covered with anything you drop a seed to grow. But paradise draws people like buffalo dung draws flies and I have a limited appetite for crowds. When I fly out to Catalina and start the hike, the noise of Los Angeles, the hum of the tires on the tarmac, the clatter of conversations, and the whoop of sirens all disappear. You hear the caw of the ravens as they dive and roll toward one another. You hear the rattle of the creosote bush. You hear the scurry of the ground squirrel. These sounds are all hidden back in Santa Monica, where I am happy when the call of a morning dove makes it through the ambient buzz of all the manmade noise. Even mountain biking along the ridges of the Santa Monica mountains does not equal the remove that the island provides.

That’s why one of my favorite photos to snap is the one looking back across the channel to the coastline. A lot of the time we head out in the morning and there is still a bit of haze or fog over the LA basin, making it difficult to see any sign of the city of twelve million people. Such a relief.

The Buffalo Were are Looking For

I like having a tradition, like the hike, and I like having things having some element of adventure. The flight out there provides some variety (the weather, the controllers, the difficulty of getting through the Class B airspace), but the real random element are the buffalo. In 1924 a handful of the animals were brought out to the island for the filming of a western. Like most things in Hollywood, it ran over budget, stranding the poor buffalo. It was okay. Over time the herd increased to 150, and eventually the inbreeding became enough of a problem that the National Parks system rotates members of the herd out to Yosemite for breeding with the larger herds there. One hundred fifty animals, weighing two thousand pounds each, seem like they would be hard to miss, but they are spread out over forty-two thousand acres. So part of the fun of heading out, especially with a visitor, is talking about the American Bison and whether we will spot any of them. Adam seems to have better luck.

My brother in law, Ted, got the closest to one (until Dexter and I watched one go by on the road, see video above). I think he was within fifteen feet of a trio of them, all part of a larger herd of about thirty. I was hiding behind cactus bushes with our two sons. 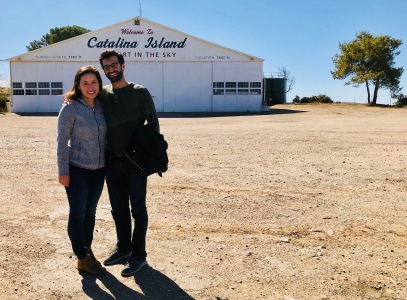 Rudy and Dexter, airport in the background 2009

Katie and a resting buffalo, Oct 2017

Andrew, Dexter and Andrea about to hike around the airport. March 2015 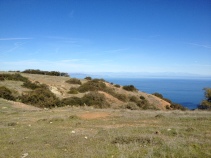 Catalina Poking through the Marine Layer 2012 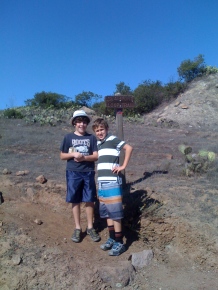 Dexter and his friend Jake 2010

Sasha and Cyrus on the Hunt for Buffalo 2013

6 Responses to The Catalina Island Hike