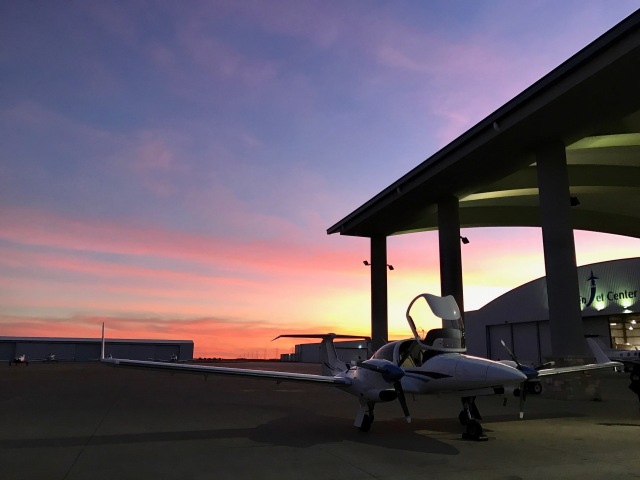 I would love to document a perfect flight. I know that I did a little round-robin of airport hopping a few years back and I was really happy that I had not made a single mistake on the radio. Since the radio is the source of my least-favorite mistake, I still work hard to match that.

On small airplanes things pop open. That sounds sort of scary, but the engineers designing the planes are away of the fallibility of latches, so almost everything that CAN open on an airplane is attached in a way that makes it popping open immaterial to the continuing flight. (One of the rare modern exceptions is the two seater version of our plane, the DA20. The canopy opens up and back, which is different than the four-seat models. There were two accidents early on where the canopy popped open on instruction flights and the canopy acted as a huge speed brake, bring the airplane down. They changed the latching system.)

Part of my pre-flight inspection is to walk around the plane tugging on the antennae, wiggling the control surfaces, and pulling on the little round doors that cover the oil inspection ports and the auxiliary fuel ports. I also check the covers on the main tanks, because I am usually dumping fuel back in after draining a little to test it.

A month ago when I was getting started in Albuquerque, I did my pre-flight inspection, hopped in and fired up the engines. While I sat waiting for the oil and coolant to warm up a little, I looked at the oil filler door [image] and it was wide open and wiggling in the light breeze from the idling propeller. So I waited five minutes for the coolant and oil to warm up, shut everything down, opened the canopy, removed my oxygen hose, headset, and safety belt to step out onto the wing for thirty seconds to secure the little door (again).

There have been accidents because things popped open. The doors on the Beechcraft Bonanza are famous for being difficult to latch proper and, unfortunately, it is on the side of the plane where the passenger gets in. So the owner or pilot climbs in, scoots over to the left seat, and then the passenger climbs in and closes the door. Even with it well-secured, the door can pop open, but I believe most of the time it hasn’t been latched quick right. The accident I often think of, now that I have a baggage compartment in the nose, is a Citation business jet departing Van Nuys airport which had the nose baggage door pop open. They requested an immediate return to the field and flew the traffic pattern, but as they turned base-to-final they crashed on a golf course.

This morning my pre-flight in New Orleans was as thorough as usual with two exceptions: the FBO’s fuel truck was still there topping the tanks, so I neglected to check the little lockable doors over the aux tank fill ports.

There’s a moment when I would check that, as I retract the gear, pull the throttles back to 75% and, in general, set the plane up for my cruise climb. That’s when I feel it’s safe for a moment to look around and make sure the plane all looks normal. There’s no door open, person hanging on the wing, or something flapping in the jet stream. Everything looked good on N972RD. I talked to the New Orleans departure controllers, flew over the main international airport, and continued west toward Lake Charles.

Climbing to 8,500 feet I passed through a few wispy, misty layers, but no real clouds. I would have climbed higher, but the winds were blowing from the west, right on my nose, at forty knots. Dexter and I had a great flight to New Orleans, kicked along by a tailwind that was often fifty knots or more, but I would pay for it all the way home.

It was a gorgeous sky over Lake Pontchartrain and I took a photo. Then I motored along in the sky toward Lake Charles. I was restrained and didn’t start blasting the Lucinda Williams for another hour or so. At one point I checked the view left and right and was shocked see the fuel door sticking up. Over an hour after my departure. So there was so strange moment when the wind blew it upwards. The left side was stuck up as well. I glanced at the moving map and saw Lafayette. I thumbed off the autopilot, told the controller I would be descending to “re-secure a filler door.” As I started the descent I saw that there was a nice airport almost directly ahead and asked the controller about it. He said that was Arcadia. I checked the runway length and weather. It looked great. I said I would land there and see him back in the air in ten minutes.

Arcadia is not a busy airport. The controller had been told I was dropping in and he asked if I was just doing a touch-and-go “or what.” I told him I just needed to hop out to lock a filler door and he cleared me to land on one-seven. (I had read the one NOTAM for the airport, which was that runway one-six was not one-seven, due to compass drift. So all of the markings, and all of my electronic data said “16” but I knew it was “17.”)

I pulled off on the first taxiway and the controller said, “Two Romeo Delta, you can do whatever you need to do right there.” So I flicked the switches, stopped the engines, started to stand up with the open canopy and almost strangled myself with the oxygen hose. Irony! I wondered if the tower controller was watching with his binoculars. I slipped it off and, stepping out onto the wing in my stocking feet, locked the fuel cap on the left, stepped over to the other side of the cockpit and locked the one on the right. Dropping back into the seat I lowered the canopy, fired up both engines, and Ground said I was cleared to taxi back to takeoff. When I got to the runway they had my VFR squawk code ready for me, which was really nice service.

I climbed up through the scattered clouds and twenty minutes after spotting the open door had it secured and I was back on course. 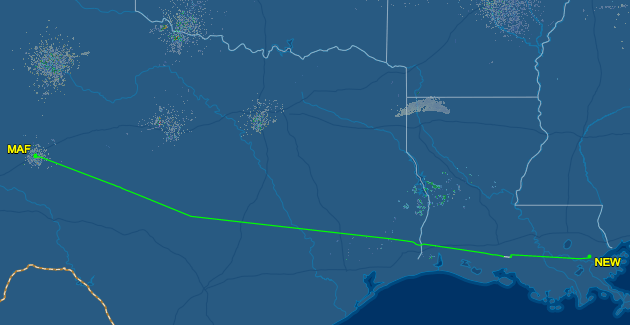 First wiggle west of NEW is the landing at KARA