That moment is tense in both directions. I wrote about becoming a bird in The Three Scariest Flights, but this is about the other moment.

To fly, the plane has to be moving quickly enough for the relative wind over the wing to create lift. For the Twinstar that’s around 83 miles per hour as I am taking off (I usually rotate the plane off the runway at 80 knots, or 91 miles per hour. When I am turning back into a truck the plane stops flying at 56 knots (64 miles per hour). That means that just as I get the wheels hovering over the concrete of the runway I pull the nose up a little more and when the last knot bleeds off the wheels settle onto the concrete. At that moment I am skittering along in a vehicle weighing over a ton and a half, at highway speeds, on a tricycle of wheels that are probably better suited to a luggage trolley pushed by hand. It is expected that in less than two thousand feet I will have this hurtling beast reigned in and sedately turning off the runway onto a taxiway.

I hold an unofficial record which I am not proud of. From discussions online it is pretty clear that I have had more flat tires in Diamond Aircraft than any other pilot.

And I know that there is one more in there around 2007 where it a tire was flat as we started to taxi out of the tie-down at Santa Monica, apparently I didn’t even bother to log it. In fact, the one in St. Louis and the one in Grinnell are both certainly caused by Foreign Object or Debris (FOD) that the plane rolled over while taxiing, so I am not sure how those count, either. (The very first was also FOD, introduced into the space between the tire and tube at the factory.)

After the first two flat tires in the Diamondstar I went up with my instructor and tried to find out if there was something I was doing wrong. Other than being a little fast on final (I prefer some air moving over the control surfaces as I get close to the ground; I dump all the speed just as I cross the fence) she said there didn’t seem to be anything I was doing wrong. My mechanic said that I had to check the tire pressure more often, which I started doing (enforced with a timer on the G1000). Other than the flats caused by something puncturing the tire I believe that took care of the problem.

(It i amazing how complex the discussion of this simple problem became. The mechanic said that one issue was that if the tube was not well-enough inflated that when the tire touched the runway it would spin, but the tube would not, which would shear off the fill tube and flatten the tube. And, at the same time, the tube had to be installed in the tire with a bunch of talcum powder, because if it wasn’t able to move around a little inside the tire, then it would bind on the inside wall of the tire and tear. It just made me long for solid rubber tires and perhaps some shock absorbers instead.)

The Twinstar was a different problem. After the flat tire at Burbank, which felt like the brakes locking up and a flat spot being rubbed in the tire and tube, I took a landing clinic with an instructor out of Angel City Flyers, where I learned to fly the DA42 to begin with. Other than the same comment (“You are carrying a little extra speed on final, you could drop another ten knots as you turn to final…”), the CFII’s opinion was that I was turning from a bird to truck just as I was meant to.

Discussing the problem with a veteran DA42 instructor up at Friday Harbor, he said, “Well, Diamond put these little boy wheels and tires on and then they have these big boy brakes, that’s not a good combination.” Since the two in-motion flat tires on the DA42 happened while I was braking that felt pertinent. I started trying to brake a little more smoothly, but the initial braking was where things were problematic. I began to research possible upgrades to the brakes.

1. The runway at KSMO, Santa Monica’s airport, got shorter. The real estate developers in Los Angeles have funded an effort to close the airport for years. I even wrote to my congressman about it but his re-election coffers were filled by the same developers. It’s not the land the airport sits on that they are interested in, it is the height restriction on the buildings along the Wilshire corridor. Closing the airport will remove the FAA as a party interested in those building heights (and those along Ocean Blvd in Santa Monica looking out at the Pacific; see Miami for a preview of how that street will eventually look). 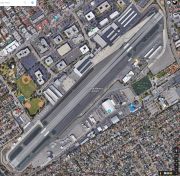 A Mile of Runway

So we used to have a runway a mile long (left). As a first step toward closing the airport they shortened the runway to 3,500 feet (right). If it had been that short when I had my rejected takeoff I almost certainly would have gone off the end or at least into the overrun area. I suppose I might have gotten away with just a flat tire.

2. The other important change is that we were now doing a bunch of landings every year at Friday Harbor (KFHR), which is a 3,400 foot runway with a 1% downhill gradient on the prevailing-wind runway. That’s where I talked to the instructor with 600 hours teaching in DA42s and figured I should do something about my brakes.

To be clear: nothing is wrong with the engineering of the brakes on the Twinstar. Hundreds of pilots are doing thousands of landings every year and not locking up their brakes or getting flat tires. I seem to have some bad luck, and maybe my feet are not sensitive enough to get the braking pressure right. But I am also all about using technology and improved engineering to reduce our risks in the plane. If replacing the brakes, or adding to the somehow, meant we were stopping sooner and under control sooner, that would be well worth it over the life of the plane.

(It also sets the plane apart and since there are fewer than three hundred of these planes flying in North America I keep careful track of the upgrades we make to ours in the hopes that it will be sort of one-of-a-kind when we go to sell it. It is already a little unusual since it has the GFC-700, reclining seats and the removable right-seat stick.)

So who makes better brakes? Apparently Beringer, and they’ve been doing it since 1985 for motorcycles and racing, moving into aircraft shortly after. If you buy a fancy taildragger airplane (even a Diamondstar Tundra, for instance), these are the brakes you get. I was told, but haven’t been able to confirm it anywhere online, that the DA62s are now being manufactured with the Beringer brake system.

When I started driving in the mid-eighties the anti-lock brakes were just starting to show up on cars. It seems like it was due in part to the cheaper and more robust electronics becoming available. A sensor on the wheel watched to see if it had stopped turning under a heavy braking. If it had, the system released the brakes for just an instant to allow the wheel to start turning again. When I tried it (on a snowy parking lot) the system thrummed the brake pedal against your foot and the car remained steerable even with the brake mashed to the floor. It was a great effect.

New things to stomp on

Jetliners have those systems. I wish I could understand what Beringer is claiming when they say their system includes “an anti-skid or pressure limiter.” As far as I could tell it has no sensor, but everyone writing about them say that it is nearly impossible to get the wheels to lock up. No idea how that works. These tires are tubeless (like an automobile tire), which seems like a vast improvement over the bicycle tire arrangement we had before.

If we gave them a three week lead time they could deliver the anodized metal as blue instead of red. That and a wiggly landing on a wet runway made the decision for me. They went on at the end of March. The first landing with them was on the shortened runway at Santa Monica and it was amazing. A night and day difference. They are smoother, more sure, and feel appropriate for the size of the airplane.

Now I need to look into a JATO upgrade for the little Twinstar.